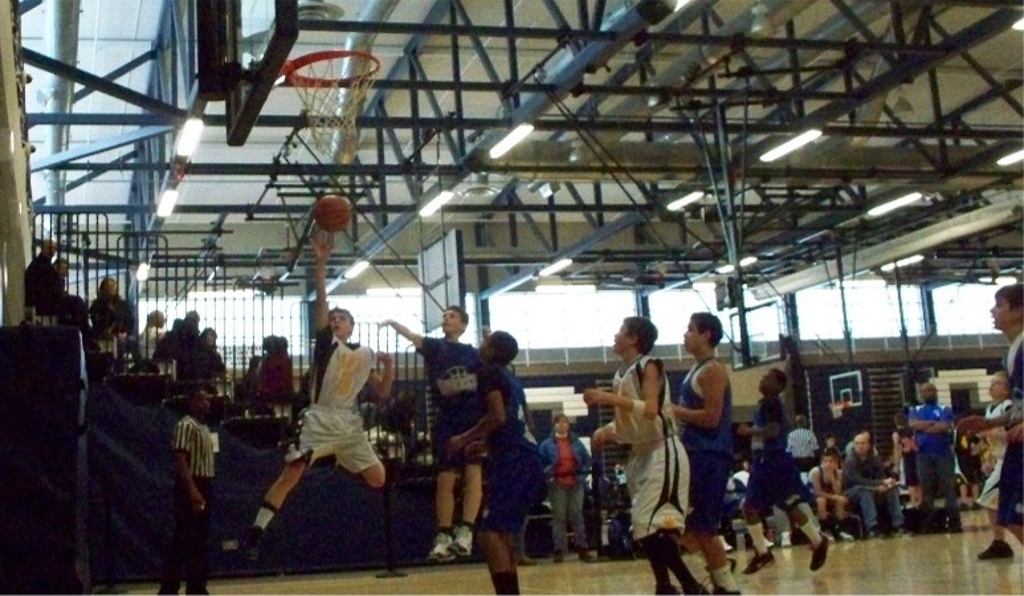 Jack McDonald out-maneuvers defense to lay one in. 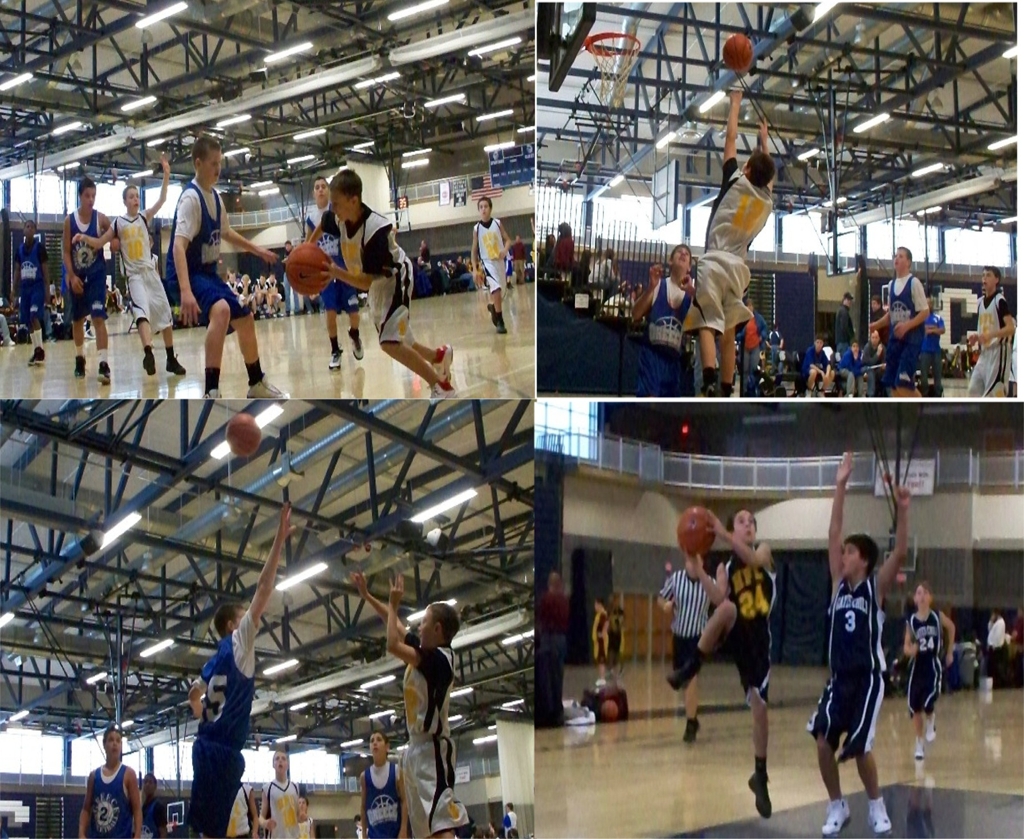 Great hustle and form all around 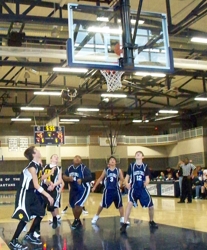 The crowd underneath awaits a rebound

New defenses added, and offense is starting to gel...

HFL-Eastman has been working diligently on a tough denial man-to-man, a 2-2-1 full-court press, a 1-3-1 half court-trap, and a straight 1-31.  Additionally, the time put in running the offensive schemes is starting to pay off in the form of on-the-court performance.

Coach Allen says "...we are able to keep teams on their heels because the boys have been executing the defensive schemes so effectively."

HFL-Eastman Climbs to 2-1 in Holiday Classic

After dropping an OT heartbreaker to Hilton Select, HFL-Eastman bounced back with two victories on the SJF hardcourts Tuesday night.

Tuesday's first game opened with a very athletic Sweden/Clarkson opening up an early lead.  The HFL boys battled back with a tenacious defense and disciplined, attacking offense, in what turned out to be a very physical game.  HFL needed a heroic 23 point fourth quarter to finally put SC away 41-36.

The key to the game offensively was the guard combination of Brandon Allen, Conner Craig, Hunter Burri, and Coleman Roach who successfully attacked the tenacious SC half-court trap.

The second game of the evening pitted HFL against GBA Farrah for the third time this season.  The teams each shared a victory and were looking for a strong showing in the rubber match.  HFL again fell behind early, as GBA was fired up and came out with a well-run full-court zone press.  Late in the first quarter, HFL found life, kicking off a 27-5 run to break open a 28-11 half-time lead.  HFL used a tenacious man-to-man defense in the second half to maintain a significant led, finishing with a 52-42 victory.

Conner Craig had a break-out game scoring 10 points, and Austin Buschang chipped in 5 including a nifty reverse layup in the first half.

The HFL boys battled in both games.  Rebounding dominance played a significant role as they held the opponents to a single shot most times down the floor.  The battle of the boards was lead by Joshua Allen who compiled an amazing 33 rebounds in the two games.  He was heavily supported by an excellent rebounding crew of Tom Eastman, nine boards, and Josh D’Agostino, Ryan Shaw, and Shane O’Grady who each contributed eight boards in the two games.  This group of strong rebounders makes it difficult for opponents to win in the trenches.

HFL-Eastman looks to go 3-1 in the Holiday Classic against a tough CYP Ciaccia on Tuesday night.

Team Ruff travelled to Livonia to scrimmage the always tough and always prepared livonia hoopsters. ESPN Hoops experts were watching this match up closely I am sure

Team Ruff emerged victorious with a hard fought 23 to 10 win.

These Cougars can play some D. Livonia struggled to score all day

Aiden " The Big A Train" Goldfarb did a little bit of everything on the floor.

Justin " the general" Hofmann ran the show at the point guard like a seasoned veteran and Garrett " G Man" Ruff also played a solid game.

The kids played very hard, and were diving all over the floor for loose balls  and battled some much bigger Livonia kids...coach Ruff was very proud.

The Play of the Day ( POD) was Little A Train calmly running the syracuse high play to perfection , making a great cut and sweet 14 ft jumper ( followed a by a super cool wave to the fans on the way back on D)

see you next week at practice> we need a parent to volunteer for pictures....